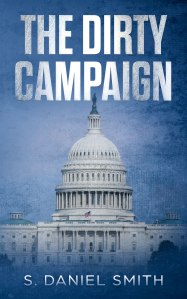 In the previous email about my Bookfunnel campaign, I laid out the business framework for the release of The Dirty Campaign, my reader magnet. In this email, I want to show you the unadulterated data from the campaign.

I’ll admit, I messed up a couple of things when I started this campaign, despite reading as many posts and FAQs as I could. One of the things I did was accidentally put in motion one of my Facebook ads early, which forced me to actually publish the story on Bookfunnel a few days before I’d intended to. That wasn’t too serious an issue, but it wasn’t the way I would have wanted to do it.

Another thing I did wrong was not pay for a good cover from the get-go. Unfortunately, the numbers indicate that it didn’t help much in the end, but most of my sign ups did come after I had a better cover on the front of the novelette (Pictured above is the better cover).

So…here are the numbers:

For a general release page, which got shared on my blog, through email, and on FB, I got the following data:

For my fiction FB Page, I got the following data:

For my political commentary FB Page, I got the following data:

I also created a “Personal For” message, which I targeted to friends and family that I wanted to specifically invite to take part. This also included my beta readers. I got the following data:

In all, I got the following data:

As you can see, this was far from a success for me. I’m not saying Bookfunnel isn’t a success for many authors, or that maybe it’s more of a success for authors who already have a following, but for getting started essentially from scratch, it’s rough. The bottom line was that, out of 782 views, and over a thousand on Facebook, I only gained 8 (!) new subscribers to my list.

Speaking of Facebook, I wanted to break down some numbers there too. This is a broad stroke look at the keywords and numbers. I’m honestly too busy to be able to dig much deeper at this time.

I actually had more success getting the signups first, and then offering the book later. Of 14 page views from 5 new subscribers, all five downloaded the book. If anything, my Bookfunnel campaign suggested that I would have done better by getting signups through a different style of campaign and then offer the book. This is still a strategy I’m employing.

If I learned anything, it’s that I went into a Bookfunnel campaign thinking that it was the magic bullet for building a mailing list. It’s not even close to that. I have a couple of things I’m working on now to make Bookfunnel part of a larger strategy for building a list, but alone, Bookfunnel just isn’t enough, at least for me, writing for my intended audience.

For those who’ve used Bookfunnel, how did your numbers work out? Better? Worse?

A freelance writer and career military man in San Diego, CA. View all posts by navychristian

Follow The Writing Home of S. Daniel Smith on WordPress.com